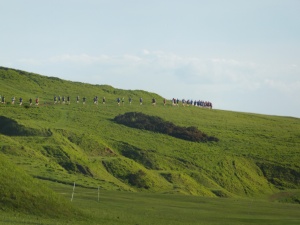 This week I ran the Cleeve Cuckoo in Bishops Cleeve near Cheltenham.  It is a 5.75 mile…ish off road run , up some terrific hills and down some terrific hills.  There were trail runners there along side road runners a run for everyone who likes that challenge.

As always I’d convinced myself I’d treat it as a training run and enjoy the view and when I arrived a lot of club members were there including Steph who nearly beat me at my last 10k, so that was it I had to race 🙂

Lots of happy runners all set off up the first slight hill and I made sure I was ahead of Steph, approaching the top the hill Allie a vet runner began to pass me and said “well done” this was a lovely gesture which I returned, but it was like a red rag to a bull and I pushed on up the hill to make sure I was ahead of her

My plan was to run all the hills – how naive I was!! I walked with others up about 3 hills and the lactic acid in my legs made it hard for me to get running again but I did.  Harder than the up hills were the down hills, my original plan was a no fear plan which worked well untill I slipped a little and fear set in which caused me to shuffle penguin like for a few yards untill I got myself together.

My slow downhill descent meant that another club mate went flying past me on the down (Liz who won the vet 55 ladies prize 🙂 it took me some effort to get past her going back up.  Whilst I pushed slowly up and took in the gorgeous scenery another club mate passed me and I put in all my effort to try to first of all catch her and then go past, on route I encouraged another club mate Rob to keep running and he told me he’d hurt his back.  Its amazing what the prospect of someone maybe beating you can do for a bad back as he soon picked up his pace and was in front of me!!  It took untill another hill that I passed him on to a wide open space and the downward view to the finish, I motored along happily and then on my left hand side Rob appeared,’ whats happened to that back I asked? he told me it was much better as he beat me over the finish.  It was a great run and I felt great !!!  even though I had been beaten by Rob, I was the first lady from my club and also not totally worn out I’d had fun.

Coach Den and Doug both say I  should not be so happy or have loads of energy left at the end of a race if I’m running to win but sometimes you have just got to enjoy what you do for reasons other than the win or the time you do it in!!