So, first of all let me answer your question. what is FItsip?

Fitsip is a hands free water container that you wear on your wrist during a fitness activity, for me 9 times out of 10 it will be on a run. It’s a great idea which means no more annoying hand held bottles.

I tried the Fitsip out for the first time on a 7 mile run. I think that is probably about the furthest I would run using one. The bladder holds 200ml of water/liquid.

Once I’d filled it up and put it on I was ready to run. At first I thought it was leaking, it wasn’t it was just my imagination and I also found it annoying to wear for the first 10 minutes or so, that’s because it was new and different BUT once into the run I forgot I had it on and was running along chatting as normal.

I think I had already decided that Fitsip was a great idea but it would not be something I’d use. Fitsip do say its for an hours activity not the 2-3 hours I can sometimes be out. Then at about mile 5 up a cross country hill, I just needed a drink, just a sip, fortunately I had Fitsip on. No it’s not an advert! it was actually the true revaluation point of what Fitsip is all about, it gave me enough just to wet my palette and make my ( not feeling too well) run a boost. It does exactly what it says it will do and will be great for various activities.

I didn’t feel I could share it with my fellow runner as the mouthpiece is very personal and soft to sip through. Where I would usually share a bottle. Not such an issue as my fellow runners can get their own 🙂

THE PROs and CONS

CONs
The initial taste was not too nice, due to newness NOT GREAT
Have to buy new bladders and mouth pieces NOT GREAT – but not too often hopefully

Fitsip does what it says and its absolutely fit for it 🙂 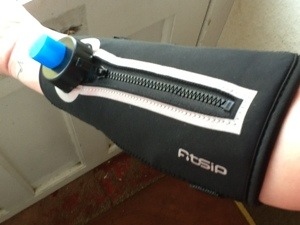