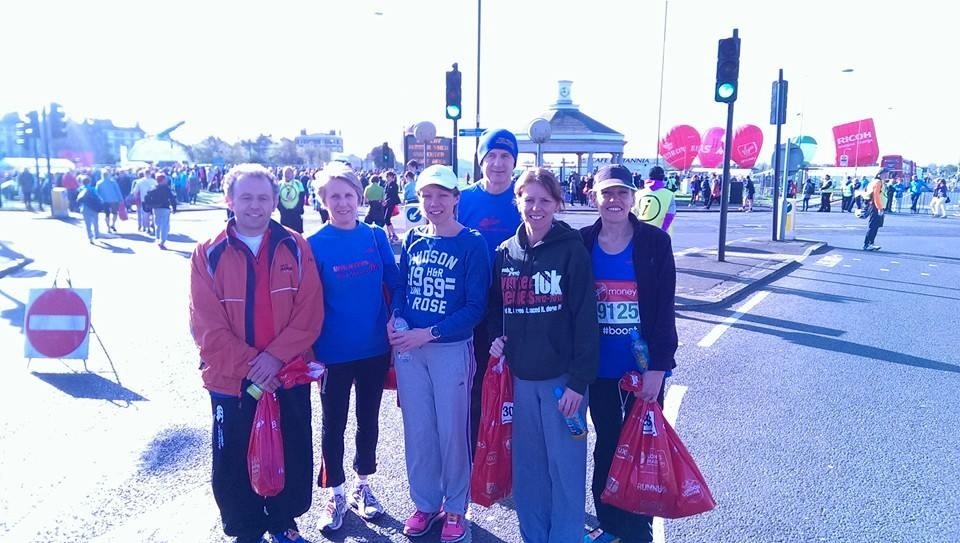 Ok, let’s start with the plan:

Well there wasn’t one really I started on one plan then decided on another and kind of went with that. It wasn’t until 3 weeks before that I felt fit enough to go for IT ok so what’s it? It was anything sub 3:19:30 my current marathon PB. Then IT became 3:18:37 my friend and fellow club members average time over his 620 + marathons. I truly thought I could do it. It was London I’ve never had a bad time in London.

Thought I had a sore throat (I didn’t)
Lost focus (I did)
Went off to fast (I probably did)
It was hot (it was but there was a breeze)
I don’t run well under pressure (nah that’s rubbish)
I only had 2 gels
I thought I’d drunk too much
I didn’t carb up,enough (did ? I don’t know)
My sleep has been very poor over the last few weeks

So how did it actually go:

I got up at 4:30am on Saturday morning which is only half an hour earlier than my usual time to get up for work. Thinking about this I always advise people to have a good nights sleep the night before the night before the race. We drove to my In-laws to get a lift from Bletchly to Milton Keynes Central rail station to catch the 7:22 train. Whilst sitting happily on the train that we had booked to get a great bargain fare the ticket inspection for came along to check our tickets. He then advised us we were on the wrong train we needed to be on the 7:40 train. He then told us we’d have to pay again a t the full rate!! Oh well you live an learn.

We arrived in London nice and early and dropped our bags of at the hotel before heading to the Expo to collect my number. That all went smoothly, and I collected my number and purchased some new kit, I was lucky to find the shorts in a small size for London marathon top and to celebrate this bought some sun glasses with interchangeable lenses that are fab.

The rest of the day was relaxed, once we’d done some people watching during lunch we headed back to our hotel where we enjoyed the afternoon relaxing. I went for a 3 mile run with some club mates to Regents park and back. We were a little lost but we made it back. We then met up for dinner and ended with an early night.

My kit was all laid out, race belt was fully loaded, I was chuffed as after 5 marathons and several long runs I finally figured out that if I twist my gels in to the belt it’s much easier. Porridge pot at the ready and to bed.

I didn’t sleep wonderfully well but I didn’t expect to and I was up before my alarm. I put my kit on had my porridge and the breakfast bar that was in my expo goody bag (the most useful item in there as far as I was concerned. Then after double, triple checking everything I headed down to meet my fellow runners in reception to be led across London by my number one supporter Doug to our start. All went smoothly and we’d all managed to get where we need to be in plenty of time. 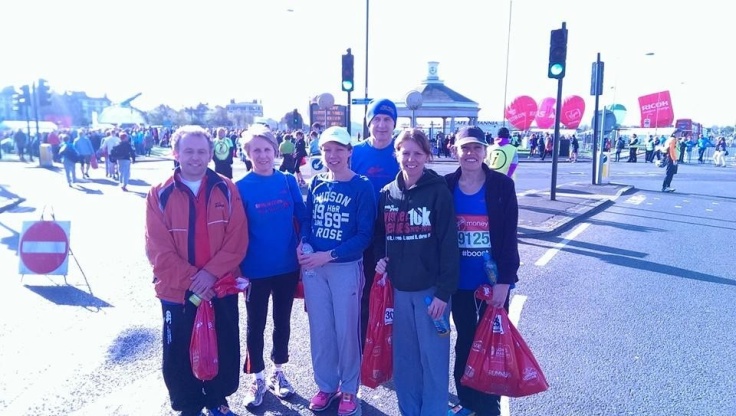 First stop loo queue, it was long and we were being reminded that the luggage trucks would be leaving in 25 mins, 20 mins, the pressure was building so it became a team effort two the trucks two in the queue. Kit all safety on board team all managed the first loo visit with time to spare. So for want of something better to do we joined the loo queue again.

I became jittery as the minutes grew less to the start and at 9:55am I let the team know I was heading to my pen, pen 3 of the green start. I worked my way through fellow runners, excusing myself until I was at the front of the pen and before I knew it the London Marathon 2014 was underway. I was over he start in seconds and jogging behind the sea of runners, as it opened up a little I picked up pace and set about what I truly believed was going to be a good run. I found myself running amongst the 3:15 pacer group which felt comfortable and reassuring. Then I asked someone if this was the green 3:15 pacer and they told me it was the blue. Panic ensued and I picked up my pace a little, I passed my supporters on route waving feeling like this was going to be the one. Then the 3:15 pacer group caught up with me, then they passed me and I saw the 3:15 flag fade In to the distance. This was the point at which I told myself I was running for the distance now not the time. I ached but I often do, I just could not talk myself in to picking up the pace. One of my team hates caught up with me and told me they had bad cramp, I didn’t have cramp just no go, he went on past me and then I met another team mate who was also having a far from planned run. I caught my cramping club mate again and was just telling him that we had just over a mile to go and he pulled up again. I was well over a PB target well over 3:30 target and just wanted to finish and get that medal. I tried to go harder in the last 800m determined to stay under the 3:37 not go over it and pootled over the finish line in 3:36:55, still a good for age time and my 4th sub 3:40 marathon in just 3 years but I still couldn’t hide a little tear of disappointment when I met a club mate on route past the baggage trucks.

Well you win some you lose some. I have added another marathon to my list and I’ll be back to run again another day. Now it’s all about the next one in 4 weeks time Windermere Marathon!